Getting the Slacker's kinematics right is critical to the whole project; this is the stage where we make the big calls about how the bike's going to ride.

Now that we've defined the hard points and the overall package of the bike we can get in to the nitty-gritty of suspension Kinematics. This step is one of the key phases in determining how the bike will ride and so it's absolutely critical to get this right before moving forward.

A conventional definition of kinematics is "the study of the motion of mechanical points without consideration to the forces applied". In terms of bike design this relates to the relationship between the various pivot locations and how they affect suspension behaviour.

The real art to Kinematics is manipulating the pivot points in a way which favour your preferred characteristics. There's no silver bullet here; moving one pivot millimetres will have both a positive and negative effect in one way or another, so the trick is to arrange your pivots so they deliver the suspension characteristics you're looking for with the fewest compromises. You need to pay special attention to clearances at all points in the travel so defining your hard points prior and really understanding the limitations of your layout is imperative (see Chapter 5: The Package).

Every bike and every layout has its challenges. If you can identify those early in the design process you can better understand them and make sure you're always working towards a solution. For example with the Slacker:

Before getting started on the pivot locations themselves I like to set up a simple 2D model using basic shapes to define parts and clearances. The 2D model would consist of all relative constraints with the BB centre as the origin. This allow me to better understand the clearances and means I can go back and forth between programs amending the model as we move pivot locations to make sure we aren’t creating any clearance issues. Once I've laid out a basic 2D sketch of the rear centre of the bike I get started on the kinematic work. We do all our kinematic work using Linkage Professional, which is a relatively affordable piece of software that is available for anyone to download. The first step is to lay out the bike within linkage defining rear axle position, shock eye-to-eye, seat tube angle/offset and tyre diameter. One you have this information you can get into manipulating individual pivot locations to best suit your desired characteristics. Personally I like to work on two separate machines duplicating each move I make within linkage in the 2D model and going back and forth like this checking clearances with each move. I then work through the kinematics saving separate version of the bike as I go and overlapping different versions on graphs so I can really zero-in on our desired kinematics.

How We Want The Slacker To Ride

Arguably (feel free to use the comments section!) the kinematics are the most important factor in determining how a bike will ride. The suspension feel and feedback are one of the most noticeable characteristics of a bike. The way the bike uses its suspension defines the chassis shape/dynamic geometry, and in turn how we ride the bike. It’s a tricky one, in an ideal world you would have a kinematic that works well for all riders, excels in all terrains and allows you to use a multitude of shock options in both Air and Coil. But that’s not realistic, whatever marketing departments tell you. Good job we don't have a marketing department. So we have to make some compromises, a few tough choices and really home in a few key characteristics we think are most important. As we've discussed in Chapter 5, these design constraints are actually a positive thing and help us to really focus in on what's important. The brief for the Slacker was all about being a fun bike to ride: Sessions not Seconds. So with that in mind we have made the following calls:

The Slacker has a progressive leverage curve with a progression rate increase of 28.7% and an average leverage ratio of 2.66. A progression rate of 28.7% for a DH bike is a moderate to high level of progression. That's enough progression so that you can use either an Air or coil shock and won't have to sacrifice small bump performance in favour of mid/end stroke support. Not so much progression that you need to be an Elite rider in gnarliest terrain to take full advantage of benefits of having 200mm of buttery smooth suspension on tap. An average leverage ratio of 2.66 balances the spring against the damper well, slightly in favour of the spring. This means you won't need to over-spring the bike and combined with the progression rate means the bike will have a natural tendency to sit in to its travel, giving the rider the feeling of sitting 'in the bike' (something we always aim for) and a stable, confidence inspiring ride.

In our view, leverage ratio and progression are the key to suspension feel and ride. And our thinking is that a leverage curve like the Slacker's should deliver a playful and poppy ride whilst still offering plenty of ground-hugging performance and stability. What this means is in the early travel the high anti-squat value will assist in resisting the active nature of the suspension up until 40% travel, after 40% we don’t expect the rider to be pedalling and the anti-squat numbers fall away minimising pedal kickback as the slacker progresses deeper into its stroke.

This consistent performance throughout the travel will translate into a neutral, predictable ride which should allow the rider to focus on riding rather than wrestling the bike. Again, that's a characteristic we try to build into all our bikes.

As with the majority of four bar bikes the axle path is predominantly forward; moving rearward 4.5mm until the sag point before moving forward and ending at 20.8mm forward of origin at the end of its stroke. We made an effort to increase the rearward movement early in the stroke in a bid to combat repeated trail stutter. Rearward axle paths get a lot of praise these days but they do have some massive drawbacks (of course). We were very careful not to overstep the mark on the Slacker as the compromises that come with a massively rearward axle path were not ones we wanted to make.

A significantly rearward axle path is always hailed for its square edge bump munching abilities which sounds great for a race bike but remember the Slacker is all about fun. The drawbacks of a rearward axle are as follows: In order to create a rearward axle path the lower forward pivot must be much higher than the rear axle; this then demands the use of novel engineering solutions such as idlers to route the chain around this pivot and counteract the resultant pedal kickback. Another drawback is as the wheel moves rearward out of the way of impacts it then also moves forward on rebound propelling it back into any oncoming impacts which can then lead to increased feedback. But finally, and most importantly to us is how a bike rides when the rear centre increases enormously in length under deep compression. In a straight line over rough terrain it’s great, but in corners and on takeoffs under hard compression the increased rear centre length can make the bike feel cumbersome. It’s hard to describe but having ridden high pivot bikes to me it feels like they rob you of your pump and pop which is not what we wanted for the Slacker.

We feel pretty confident in the calls we've made so far, but as the saying goes, “the proof of the pudding is in the eating.” Until we have physical prototypes and we've spent plenty of time riding the Slacker we can’t be certain we have got it all right. When it comes down to suspension feel and characteristics no amount of graphs can tell you how it will feel on trail so there really is no replacing putting some ride time on the prototypes.

And we absolutely can't wait to do that...

Well done. You've got this far and that means you've been reading a lot of technical detail and so far, you haven't even seen a bike. So here's a little sneak preview of the first Slacker prototype which is just around the corner. From now on, things are going to get real... 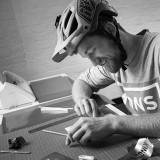 James grew up in Sheffield and Wharncliffe is his local. He spent a few years guiding in NZ but now he's back, helping with all things Airdrop.

This is ridiculously exciting stuff!!! I can’t wait to see it hit some dirt! Well done you lot on doing this…!

I’ve always wanted to see build details with explanations for engineering choices and so far you’ve explained every detail superbly, without over complication… excited just to read about the build process let alone the itch to see this built!

Cool Bike! Looks like you are using bolted on dropouts, would be cool to see different dropouts for different chainstay lengths like the guys at banshee do :) Like reach adjust headsets, i find adjustable chainstays are a great way to finetune the fit of a bike.